Archives hold mysteries waiting for the curious to come along and solve. One of these can iphone 6 replacement screen be found in the diary of Anna Fannie Gorham, a young woman living in Hamilton at the beginning of the Civil War.

Anna describes her life with entries on visiting her sisters, reading, mending and courtship.

Her diary is found in the Anna Fannie Gorham Diary Collection at Columbus State University Archives in Columbus, Ga.

Beginning on Monday, December 30, 1861, the diary presents a cloudy view of Anna’s life. It often makes oblique references, in one case mentioning only “the surprise.”

It is also, underneath the cloudiness, attentive and funny. On January 12, 1862, Anna went to a prayer meeting at the Methodist church: “Col. Mobley got up to make some remarks and Lucy Gibbs got up and left.”

Another entry describes an argument involving gunfire, ending in the arrest of a “Mr. McinTyer.” She says, “Bud locked him up in his office a while and then brought him home with him to dinner.”

Anna was smitten with her sister’s step-son, Wes Murphey, who “told me he loved me better than any one else, that he had a perfect fancy for a small lady, he did not like these overgrown girls.” After a two-year courtship, Anna became disillusioned with Capt. Murphey, recording that she sent him “a note to wound his feelings if possible. He is not the man I thought he was. he (sic) drinks very hard.”

Was Anna overtaken by illness? Did she die of a broken heart? Or was the remainder of her diary simply lost  in the hardship of the coming years?

Anna’s mysterious diary is included in the Digital Library of Georgia. Perhaps an historian, or maybe just some inquisitive person, may stumble across her diary one day and wish to find answers to the questions it raises. 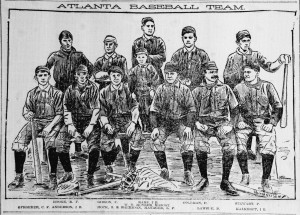