The Digital Library of Georgia, in partnership with Live Oak Public Libraries, has made the Savannah Tribune (1943 to 1960) available for viewing at the Georgia Historic Newspapers website. The site provides access to these newspapers with full-text searching, browsing by date and title, and is compatible with all current browsers. The newspaper page images can be viewed without the use of plug-ins or additional software downloads. The archive is free and open for public use.

Funding for the digitization of this title was provided by the Georgia Historical Records Advisory Council with funds awarded to the University of Georgia Libraries and the Georgia Archives by the National Historical Publications and Records Commission (NHPRC).

Founded as the Colored Tribune in 1875 and renamed the Savannah Tribune in 1876, the newspaper has served as one of the longest-running African American publications in the South, with a mission “to promote the cause of education, cooperating with all teachers and workers in that cause, and the moral and material advancement of the colored people.” Reporting from Reconstruction through Jim Crow, the paper featured famed Harlem Renaissance writer James Weldon Johnson as a correspondent from the 1920s to the late 1930s and played an instrumental role in the boycott movement that began in the early 20th century and fueled the Civil Rights Movement throughout the 1960s. To this day, the Savannah Tribune stands as one of the most prominent African American newspapers in the country as it continues to serve Chatham County’s African American community.

Belle Reynoso, the director of information technology, and Linda Bridges, the genealogy/reference librarian at Live Oak Public Libraries say: “We chose the Savannah Tribune because it’s one of Savannah’s most important African American historical resources. The first edition of the paper, which was called the Colored Tribune, was first published in 1875. It was not published from 1878 to 1886 or from 1960 to 1973. The issues chosen for digitization, October 1943 to September 1960, include much of the developing Civil Rights Movement in Georgia and beyond.

View the entire digitized run of the Savannah Tribune

The Georgia Historical Records Advisory Council (GHRAC) promotes the educational use of Georgia’s documentary heritage by all its citizens, evaluates and improves the condition of records, encourages statewide planning for preservation and access to Georgia’s historical records, and advises the Board of Regents and the Georgia Archives on issues concerning records.

About the Live Oak Public Libraries

Established in 1903, the Live Oak Public Libraries are a consortium of sixteen public libraries in the Savannah and the Hinesville-Fort Stewart metropolitan areas of Georgia. These libraries provide excellent, responsive services for residents of Chatham, Effingham, and Liberty counties, and develop programming that enriches people’s lives, supports lifelong learning, and builds and enhances their communities.

About the National Historical Publications and Records Commission (NHPRC)

The National Historical Publications and Records Commission (NHPRC), a statutory body affiliated with the National Archives and Records Administration (NARA), supports a wide range of activities to preserve, publish, and encourage the use of documentary sources, created in every medium ranging from quill pen to computer, relating to the history of the United States. 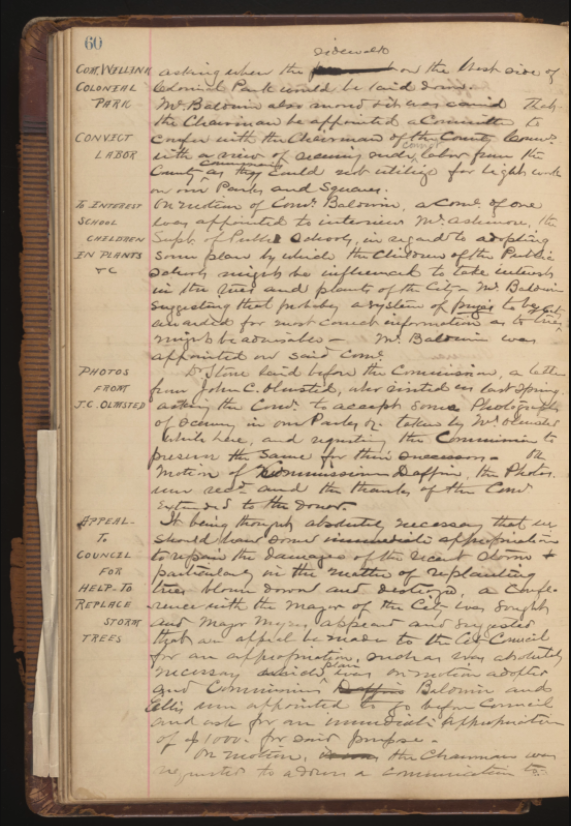 In partnership with The City of Savannah Municipal Archives, the Digital Library of Georgia has just made the minutes of the Park and Tree Commission 1896-1929 available freely online.

The historical significance of the collection may not be obvious at first, but Luciana Spracher, director for the City of Savannah Municipal Archives, describes its importance to contemporary research:

“While on the surface the Park and Tree Commission Minutes might seem mundane, upon closer inspection they contain important information that reflects the intersections of urban planning and civil rights, trends in landscape design, development of Savannah’s cemeteries (both African American and white, since Savannah’s cemeteries were originally segregated), and details such as the use of convict labor in city infrastructure projects; all topics that draw on current socio-political trends and that are largely underrepresented in scholarship.”

“Minutes from the early 20th-century discuss issues surrounding segregation of public facilities, such as public pools and park benches. These records offer insider perspectives into the decision-making process related to these Jim Crow-era policies that are not often found in governmental records.”

Spracher also describes the importance of digitizing the collection for accessibility:

“Currently this collection is underutilized by researchers because it is available only on site in our research facility in Savannah and is often overlooked as researchers are likely to believe it contains information limited to topics such as tree planting, parks and playgrounds. By digitizing the collection and sharing it through the Digital Library of Georgia (and thereby through the Digital Public Library of America), it will become more widely accessible to researchers in broad geographic locations.”

Daves Rossell, professor of architectural history at the Savannah College of Art and Design

adds:  “Having a doctorate in American architectural and urban history, with a specialty in vernacular architecture and cultural landscape, I have had call to use the Municipal Archives on many occasions, including in preparation for historic district nominations, historic landscape recordation, and a variety of research on individual buildings. Without the Park and Tree Commission’s records, such fundamental aspects of our civic heritage would be as good as lost. The Park and Tree Commission records are among the most diverse and valuable resources available on many such topics.”

The City of Savannah Municipal Archives collects, manages, preserves, and makes accessible records documenting the City of Savannah’s history; administers the records management program and the City Records Center to increase the efficiency of City agencies; and shares the City’s history with City employees, citizens, and visitors through outreach activities. The Municipal Archives services reference requests from researchers and the general public which relate to archival and historical City records under its administration in the City Records Center, and shares the City’s history through a variety of public outreach activities, including tours of City Hall, permanent and rotating exhibits, and special programs. Discover the Archives at www.savannahga.gov/MunicipalArchives.