The Pandora, the University of Georgia’s yearbook, has been published nearly every year since 1886, serving as a rich source of institutional and social history that has traced the growth and development of the country’s first state-chartered university. Through a partnership between the Hargrett Library, University Archives, and the Digital Library of Georgia, yearbooks that document campus life, students and faculty, clubs, and other events from 1965 to 1974 have been digitized, allowing free online access to Pandoras that document the years following desegregation and the first social movements for black students, women’s liberation, gay liberation, and campus free speech as they manifested themselves on the UGA campus. These editions are now available at https://dlg.usg.edu/collection/dlg_pandora.

“The Pandora is a record created by and for students, and it naturally presents their perspective first and foremost. Not all of their views reflect our institutional values today. Still, a number of students depicted in the Pandora at this time were striving to create a more inclusive and conscientious campus, as evidenced by their writings, photos, artwork, and images of protests. The yearbooks are a crucial document for capturing the early days of student dissent and activism that continues on campus to this day,” said Steve Armour, university archivist at the Hargrett Rare Book & Manuscript Library, one of three special collections units of the UGA Libraries.

College yearbooks can help people interested in genealogy research or sports history. They also play a role in documenting the history of UGA and, by extension, the state of Georgia and higher education in a broader sense. The project to digitize the 1965-1975 Pandoras expands the virtual collection of materials, including the first 50 years of publication, allowing alumni, other UGA community members, or anyone with interest to explore more than decades of UGA’s history online.

Larry Dendy, a UGA alumnus who worked in UGA’s Office of Public Affairs for 37 years (1972-2009) and wrote the book Through the Arch: An Illustrated Guide to the University of Georgia, published by UGA Press in 2013, noted that the time period was marked by university milestones as well as national trends.

“The decade of 1965-1975 was a critical period as the University dealt not only with national social and political upheavals but also with many major campus issues including enrollment increases, advances in research and academic quality, physical plant expansion, newfound athletic successes, and changing student attitudes and mores,” he said. “These and many more challenges and changes of this decade are documented by students themselves through their photos and narratives in Pandoras. Their perspective—whimsical, irreverent, ironic but often incisive—opens a revealing lens into the mood and mentality of college campuses in this time.”

The University of Georgia Archives preserves over two centuries of the University’s history in the form of official records, images, plans, publications, and artifacts. Their mission is to acquire, organize, preserve, and publicize such materials and to assist researchers in their use. Visit them at libs.uga.edu/hargrett/archives/. 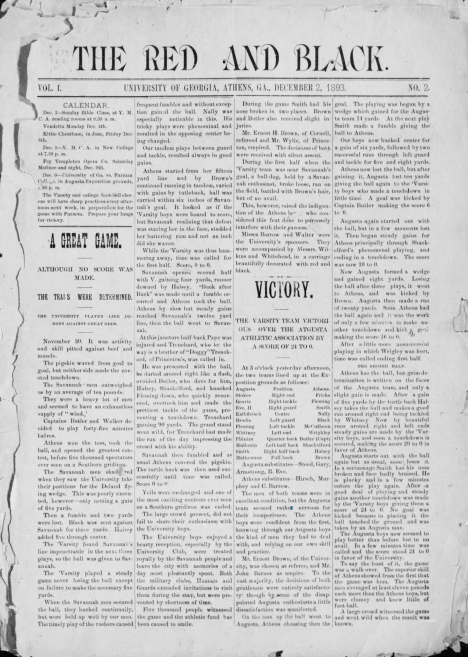 The Digital Library of Georgia (DLG) is pleased to announce the availability of the Red and Black in the Georgia Historic Newspapers Archive (GHN) at https://gahistoricnewspapers.galileo.usg.edu/lccn/gua1179162/ . Since 1893, the Red and Black has provided a training ground for University of Georgia students interested in gaining experience in various aspects of newspaper publishing and to produce a high quality daily newspaper for the University of Georgia community.

The Red and Black debuted in 1893 as a newspaper devoted to the interests of the University of Georgia’s student body. Two years later, the publication was discontinued after a conflict between university faculty and the Red and Black. In September, 1895, the publication resumed as a private venture, which proved successful enough to convince faculty to reclaim the paper in 1896. The University of Georgia Athletic Association assumed control of the Red and Black, which operated there in connection with the School of Journalism. In 1980, the UGA Board of Regents voted to approve the paper’s independence from the university. The Red and Black remains an independent publication and is the most widely circulated college newspaper in Georgia.

“As we celebrate our 125th anniversary, this is an exciting development for The Red and Black,” says publisher Rebecca Burns. “Our archives provide a record of student life and athletics at the University of Georgia that students, alumni, and fans appreciate. They also are a resource for researchers and scholars looking for insights into a student perspective on a host of important issues, from the World Wars and Vietnam War to the integration of UGA to more contemporary events and issues such as 9/11.”

The University of Georgia Libraries has launched a crowdfunding campaign to digitize back issues of the Red and Black dating from 2007-present. Currently, issues from 1893 to 2006 are available on the new website. The archive is keyword searchable, making it a valuable resource for the University community. To support or to learn more about this project, visit https://dar.uga.edu/funder/campaigns/digitize-the-red-black/ .

Based at the University of Georgia Libraries, the Digital Library of Georgia http://dlg.galileo.usg.edu/ is a GALILEO initiative that collaborates with Georgia’s libraries, archives, museums, and other institutions of education and culture to provide access to key information resources on Georgia history, culture, and life. This primary mission is accomplished through the ongoing development, maintenance, and preservation of digital collections and online digital library resources.  DLG also serves as Georgia’s service hub for the Digital Public Library of America and as the home of the Georgia Newspaper Project, the state’s historic newspaper microfilming project.