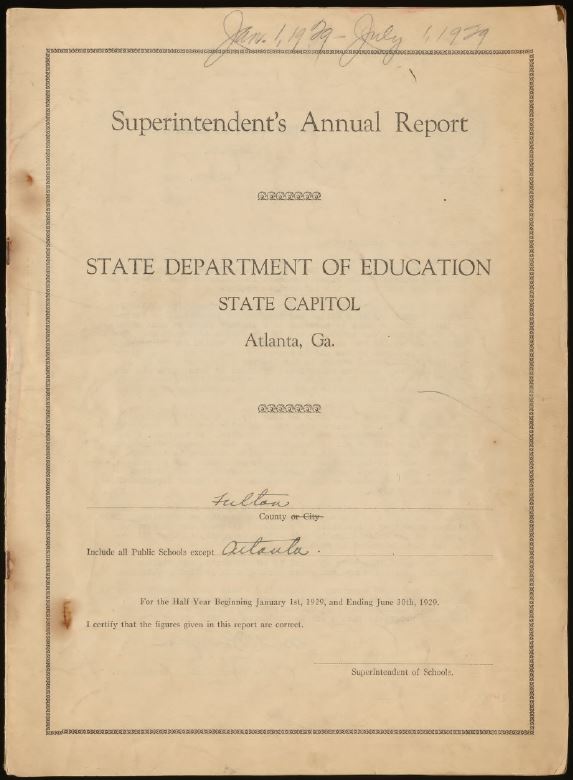 ATHENS, Ga. — The Digital Library of Georgia (DLG) is pleased to announce the availability of Superintendent’s annual reports for the Fulton County, Georgia school system at dlg.usg.edu/collection/fcs_superintendents. These resources have been made available online thanks in part to the DLG’s Competitive Digitization grant program, a funding opportunity intended to broaden DLG partner participation for statewide historic digitization projects.

These annual reports were submitted by local, public school districts to the State School Superintendent’s Office as part of their operations to receive accreditation and funding, and contain demographic information pertaining to the growth of the school system located in and around Atlanta between the years 1929 and 1977. Data was collected on both African American and white schools and was expressed using the “dual school system” terminology of “colored” and “white.” The reports also contain material related to school employees, building materials and valuations, as well as transportation and supply costs. A small portion of this collection includes reports from Milton and Campbell counties just before they merged with Fulton County.

“Information gathered from school systems have a great potential to illuminate the history of a place…from learning and teaching to voting and playing, they are institutions that reflect the social and cultural milieus of the districts they reside within. The Superintendent’s Annual Reports of Fulton County Schools document this story by offering a look at the growth of metro Atlanta throughout some very crucial decades of the twentieth century. The oldest portion of this collection provides evidence of a largely rural and segregated district during the Great Depression, while the latter portion is a culmination of the movement to integrate the schools after the Brown v. Board of Education decision of 1954–a process that lasted seventeen years. In this respect, the reports help to clarify one of the defining issues of the Civil Rights Movement.”

The Fulton County Schools Archives preserves and maintains a wide range of historic materials such as board minutes, school yearbooks, and audiovisual recordings while serving the public as a repository for these historical collections. Visit www.fultonschools.org/archives.

In 1950, Horace T. Ward became the first African American to challenge the racially discriminatory practices at the University of Georgia (UGA).

Although the all-white UGA School of Law rejected Ward’s application and a federal court subsequently upheld the university’s decision, Ward’s challenge to the university’s segregationist policies began a legal process that would eventually bear fruit in 1961 when Ward returned to Georgia to assist Donald Hollowell and Constance Baker Motley in their renewed efforts to desegregate UGA. On January 6, 1961, Judge William A. Bootle ordered UGA to admit two African American students, Hamilton E. Holmes and Charlayne A. Hunter,  ending 175 years of segregation at the university.

Ward served as a partner of the law firm of Hollowell, Ward, Moore, and Alexander during the early 1960s. From 1965-1974, he served in the Georgia state senate. U.S president Jimmy Carter appointed him to a federal judgeship on the U.S. District Court for the Northern District of Georgia in 1979, which made Ward the first African American ever to sit on the federal bench in Georgia.

The Civil Rights Digital Library includes numerous archival collections, reference resources, and educator resources that refer to Horace Ward, they are available at: