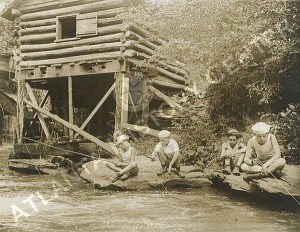 Georgia’s recent pre-summer heat wave left many of us wilted and wishing for the languid days of childhood. Of course, one of the pleasures of summertime has always been summer camp. The photos of Camp Dixie in the Carlisle Family Photographs Collection show that not much has changed since they were taken in the mid-1920s.

The photo collection at the Atlanta History Center portrays four generations of the Carlisle Family of Atlanta. In addition to the summer camps, the collection includes images of basketball games and a military parade in downtown Atlanta shortly after World War I.

So dive in for some summer fun (and check out the skinny dipping shot!)

In May, the Digital Library of Georgia and the Cuba Archives of the Breman Museum announced the expansion of the Southern Israelite Archive:

The Southern Israelite Archive now includes issues from 1959-1983, and spans the years 1929-1986, including over 48,000 images. Rabbi H. Cerf Straus established the Southern Israelite as a temple bulletin in Augusta in 1925. The publication was so popular, he expanded it into a monthly newspaper. Later in the decade, Straus sold the paper to Herman Dessauer and Sara B. Simmons, who moved the paper to Atlanta, where it began circulating state-wide and eventually throughout the South. In 1930, M. Stephen Schiffer, a former employee of the Atlanta Georgian, took over as sole owner of the Southern Israelite. Even in these earliest years, the paper not only covered the news of the southern Jewry, but also the issues that involved Jewish populations throughout the nation and world, including the Holocaust and later the creation of the Jewish state of Israel.

In October of 1934, the Southern Israelite began publishing a four page weekly edition, supplemented by its established monthly magazine edition. Ownership of the paper was turned over to a corporation headed by Israelite editor Adolph Rosenberg in 1951, while the paper continued its mission as the voice of the Jewish community in Atlanta. In October of 1958, the paper was at the forefront of the coverage of the Temple bombing in Atlanta, giving its readers a unique first hand perspective. The monthly edition of the paper was discontinued in 1973 in favor of its increasingly growing weekly edition. In 1987, the paper changed its name from the Southern Israelite to the Atlanta Jewish Times and guaranteed at least thirty-two page issues moving forward. The paper is today owned by Jewish Renaissance Media and continues as a weekly publication with a readership of over 25,000.

The Southern Israelite database is a project of the Digital Library of Georgia, a GALILEO initiative that shares Georgia’s history and culture online. Digitization is made possible by the Cuba Archives of the Breman Museum and the generosity of the Srochi family of Atlanta.