On James Brown’s birthday, we highlight four places to find the Godfather of Soul in the Digital Library of Georgia (and one YouTube bonus):

1. The New Georgia Encyclopedia – Don’t know much about James Brown? This is a good place to start. Although he was born in Barnwell, South Carolina, he was a Georgian through and through. He spent most of his life in and around Augusta, Georgia, where a street is named for him and a statue stands in his honor. The image below is included in the article courtesy of the Atlanta University Center, Robert W. Woodruff Library Archives.

2. The Red and Black Newspaper Archive – Included here is an article from the April 30, 1968 issue of the Red & Black (the University of Georgia’s student newspaper) announcing a benefit concert he held in Athens to benefit underpriveleged children. Can you imagine seeing Soul Brother Number One for the ticket price of only $3.50? What a deal! There are many other news articles related to James Brown in the archive and can be searched by keyword. 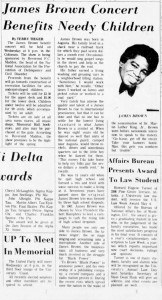 3. Georgia Government Publications – This is a December 28, 2006 press release from Georgia governor Sonny Perdue regarding the death of James Brown, who had passed away a few days earlier on Christmas.

4. African American Funeral Programs from the East Central Georgia Regional Library – James Brown’s funeral was held in the James Brown Arena in Augusta, Georgia and was officiated by the Reverend Al Sharpton. The program includes images, an obituary, an order of service, and even a list of his many sayings including: “I’d rather die on my feet than live on my knees.” 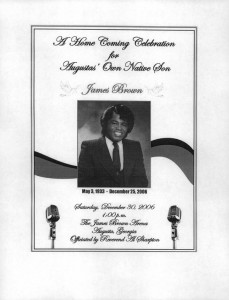 5. James Brown YouTube Concert Clip – They don’t call him the Hardest Working Man in Show Business for nothing. Check out this clip of him performing Good Foot in concert in the early 1970s. It’ll blow your mind.

The Academy of Motion Picture Arts and Sciences released their Oscar nominations this week. In celebration of the upcoming awards ceremony, we highlight movie ads found in the Digital Library of Georgia’s newspaper archives: 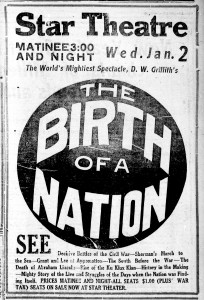 D. W. Griffith’s controversial film The Birth of a Nation was the longest feature film in history at the time of its release. The ad can be found in the December 28, 1917 issue of the Milledgeville News in the Milledgeville Historic Newspapers Archive.

The Kid was Charlie Chaplin’s feature length directorial debut. The ad is from the March 24, 1921 issue of the Athens Banner in the Athens Historic Newspapers Archive. 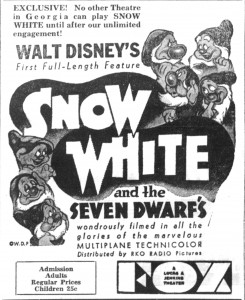 The Exorcist was nominated for ten Academy Awards following its 1973 release and is considered by many to be the scariest movie of all time. This Exorcist movie ad is from the May 10, 1974 issue of the Red and Black from the Red and Black Archive. The issue also contains movie ads for Blazing Saddles and Gator Bait. 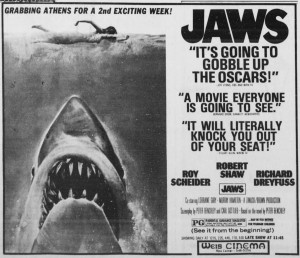