On January 9th, 1961, Hamilton Holmes and Charlayne Hunter-Gault walked on campus to register at the University of Georgia. They were the first African American students allowed to do so. This Sunday will mark the 50th anniversary of that momentous day.

As captured in this video from Civil Rights Digital Library, Holmes and Hunter-Gault entered the Administration building amidst chants of “Two-four-six-eight! We don’t want to integrate!” Two days later, another crowd of white students would assault the dormitory in which Hunter-Gault was staying, hurling bricks and bottles until the police arrived. Holmes and Hunter-Gault would be removed from campus for a short period before finally returning to undertake their studies.

The story of the University of Georgia’s desegregation is as large as the courage of those two students. There are several resources available through the Digital Library of Georgia for learning about this pivotal moment in our state’s history.

Below is a list of important figures (each link from the Civil Rights Digital Library contains a brief biography and links to materials about the person: photographs, videos, newspapers, etc…)

Horace T. Ward: He applied to the University of Georgia Law School in 1950 and was denied admission. He challenged the decision in court, and though unsuccessful, his efforts were the beginning of the end for segregation at the University of Georgia. Ward would eventually become the first African American in Georgia to be appointed a Federal Judge.

Ernest Vandiver Jr. (1918-2005): Governor of Georgia from 1959 to 1963. Promised to maintain segregation as Governor, but ultimately refused to close the university as desired by Georgia lawmakers outraged over its desegregation.

Mary Frances Early: The first African American to graduate from the University of Georgia.

The DLG has a collection of Red and Black newspapers (the university student newspaper, independent since 1980) in which one can read coverage of the event. Here is a portion of the front page from that day: “Non-Violence Urged By Dean of Students In Campus Meeting.” 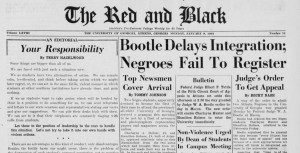 The Clifford H. (Baldy) Baldowski Editorial Cartoons collection at the Richard B. Russell Library for Political Research and Studies contains work about the integration of UGA.

The Hargrett Rare Book & Manuscript Library has a finding aid online for their collection: University of Georgia Integration Materials 1938-1965.

NPR has posted an interview with Charlayne Hunter-Gault in which she reflects upon the events of 50 years ago.

And finally, in honor of the anniversary, the University of Georgia has a series of events planned. A list is available here, for those in the area wanting to attend.

Today would be the 101st birthday of Georgia artist Lamar Dodd. He was born September 22, 1906 in Fairburn and raised in LaGrange, Georgia. The New Georgia Encyclopedia provides an overview of his life and artistic career. You can also find his birthday marked on “This Day in Georgia History” at the GeorgiaInfo site.

Dodd left Georgia as a youth to study in New York, but would return and take a position with the University of Georgia (UGA). He would eventually lead the art department at UGA from 1938 until 1973. In 1996, the art school was renamed the “Lamar Dodd School of Art” in his honor (a more in depth account of his work with the art school can be found here). The Lamar Dodd Art Center, part of LaGrange College, is also named in his honor.

A photograph  of his childhood home in LaGrange can be found in the Troup County Digital Archives Project Photograph Database and in the Hubert Bond Owens and John Linley Image Collections at the Owens Library. And finally, you can read about Lamar Dodd in Thomas Reed’s The History of the University of Georgia (Chapter 16). A manuscript page of the chapter titled “Department of Art, Lamar Dodd” is viewable through an online collection from the Hargrett Library at UGA.