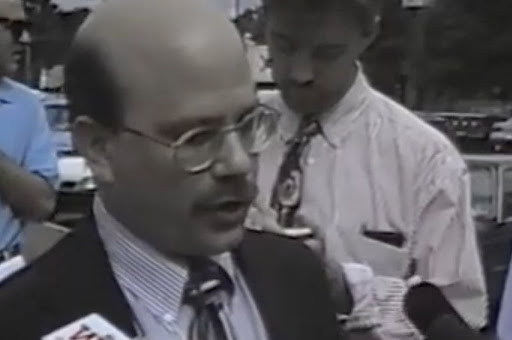 Pro- and anti-LGBTQ activities and demonstrations in Cobb County circa 1995 are the main component of a new digital collection belonging to Georgia State University Special Collections, funded by a competitive digitization grant awarded by the Digital Library of Georgia (DLG). GSU Special Collections received a service grant awarded in 2020 to broaden the DLG’s engagement with diverse institutions and collections across the state of Georgia.

In August, Cobb County commissioner Gordon Wysong led the Cobb County Board of Commissioners to two anti-LGBT+ resolutions: one specifying that funding would only be provided for art that promoted “strong community, family-oriented standards,” and the other stating that “lifestyles advocated by the gay community should not be endorsed by government policymakers, because they are incompatible with the standards to which this community subscribes; and that gay lifestyle units are directly contrary to state law.”

Marietta civic leader and activist Jon Greaves and local community members immediately responded by organizing together as the Cobb Citizens Coalition (CCC) to challenge the resolutions.

The CCC gained important allies in February 1994, when Atlanta-based activists Pat Hussain and Jon-Ivan Weaver established Olympics Out of Cobb County (OOCC). Their mission was to persuade Atlanta’s Committee for the Olympic Games not to hold the women’s volleyball competition in Cobb County as planned. Their efforts succeeded: ultimately, the women’s volleyball competition was held in Athens at the University of Georgia instead, and the Olympic torch bypassed Cobb County altogether.

While CCC was active, CCC member and Marietta resident Carol Brown documented the organization’s activities and those of OOCC by recording protests, marches, and local news coverage, using audiocassettes, videotape, and photography.

She also saved almost-daily newspaper reports, providing a wide range of coverage of events as they unfolded in Cobb County. The audiovisual materials have been digitized and described by the DLG as part of its service grant, and the newspaper reports were digitized in-house at Georgia State University.

Carol Brown also recounted her personal memories in an oral history that is part of the Activist Women’s Oral History Project. Together, they provide a rich and powerful narrative about a small community’s response to local discrimination that garnered international interest.

Carol Brown’s materials are unique and significant to Georgia because so much of Georgia’s recorded LGBTQ+ history has been Atlanta-focused. Carol Brown’s materials focus on pro-and anti- LGBTQ+ activities in traditionally conservative Cobb County. They are also important because they highlight several challenging backstories about art censorship, community protest, and the 1995 Olympic Games that garnered national and international interest.

Digitization of audiovisual items from the Carol Brown Papers, 1993-2012 (bulk 1993-1994) focusing on pro-and anti- LGBTQ+ activities in traditionally conservative Cobb County and the campaign to move 1996 Olympic events out of the County. Furthermore, in a time of daily protest that we find ourselves in now, the collection illustrates the power of creative, peaceful protest.

The Women’s Collections chronicle women’s activism and advocacy in Georgia and the Southeast. Within this curatorial area are several notable collections: the Donna Novak Coles Georgia Women’s Movement Archives, the Lucy Hargrett Draper Collections on Women’s Rights, Advocacy and the Law, and the Archives for Research on Women. For more information, read the Women’s Collections research guides at research.library.gsu.edu/womenscollections. The Gender and Sexuality Collections document LGBTQ+ communities in Georgia and the Southeast. For more information, read the Gender and Sexuality research guide at https://research.library.gsu.edu/c.php?g=912561.

Selected stills from the collection: