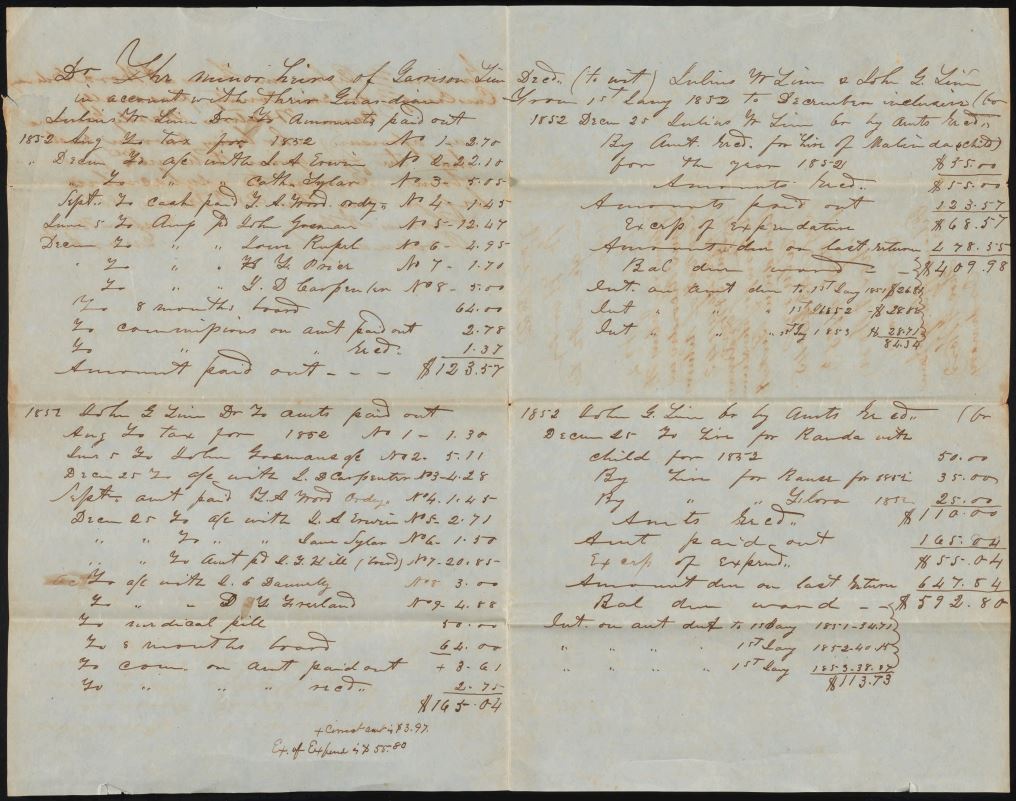 The Digital Library of Georgia (DLG) is pleased to announce the availability of the Bartow History Museum vertical file record collection at dlg.usg.edu/collection/barhm_bhmvf. The collection, which belongs to the Bartow History Museum, is available online thanks in part to the DLG’s Competitive Digitization grant program, a funding opportunity intended to broaden DLG partner participation for statewide historic digitization projects.

Trey Gaines, the director of the Bartow History Museum, says: “The digitization of these items provides documentation of under‐represented subjects, particularly citizens of lower economic standing, from the Civil War through the Great Depression. The movement and financial status of families and individuals that lived and moved in and out of Bartow County are demonstrated through the collection’s land, indenture, and guardianship papers. Family dynamics and cultural or social values can be studied through the lunacy and guardianship records that contain information on how people were diagnosed and labeled, as well as how children were legally handled in cases of custody or guardianship. Some of the indenture records show the plight of children after the Civil War, and some further contain information that speaks to matters of race relations.”

Genealogist Yvonne Mashburn Schmidt notes “This area’s rural, agricultural and yeoman families generally were unconcerned with creating records themselves…This record collection held by the Archives contains uncommon records such as mercantile and miscellaneous receipts, voter lists, smallpox lists, pauper lists, indentures, and estray records. These county records generally are not available to researchers. Ancestral names in these records might be found when no other record for the ancestor exists…Historical migration routes and early land grants make Georgia’s records especially important. Ancestors from northern and mid-Atlantic states often settled in or passed through Georgia. Some of these and their descendants who settled or stayed for a time participated in Georgia land lotteries. Cass (now Bartow County) was one of the original counties created after Cherokee County’s division, and this county’s land was part of the 1832 Georgia land lottery. Many of this collection’s loose records were created between 1850-1880 and include land grants and deeds that may not exist in any other local or state repository. These grants and deeds are original records.”

The Digital Library of Georgia is pleased to announce the expansion of the North Georgia Historic Newspapers Archive:

The North Georgia Historic Newspapers Archive now provides access to fifteen newspaper titles published in nine North Georgia cities (Canton, Cassville, Cedartown, Clayton, Cleveland, Dahlonega, Dalton, Gainesville, and Rome) from 1850 to 1928. Consisting of over 63,000 newspaper pages, the archive provides historical images that are both full-text searchable and can be browsed by date. The site is compatible with all current browsers and the newspaper page images can be viewed without the use of plug-ins or additional software downloads.

The North Georgia Historic Newspapers Archive is a project of the Digital Library of Georgia, a part of Georgia’s Virtual Library GALILEO and is based at the University of Georgia.