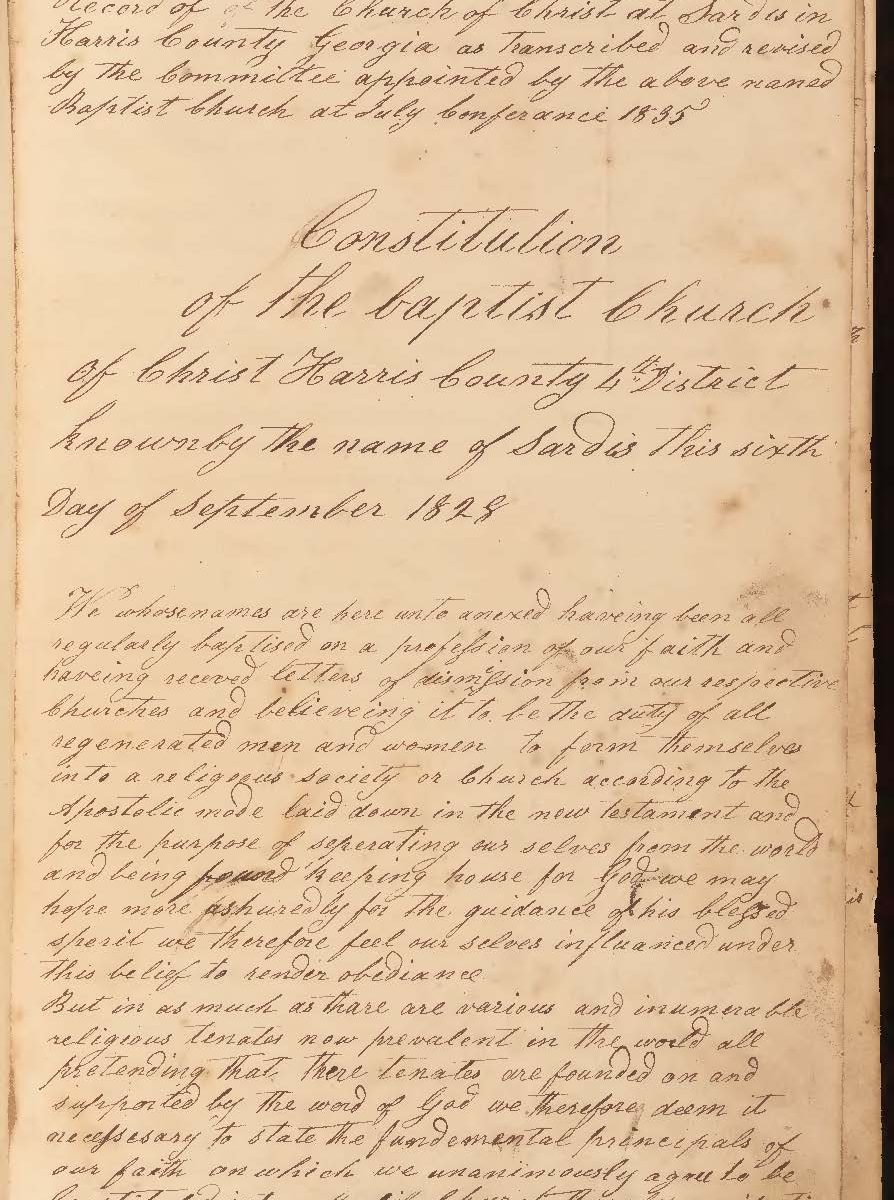 A record book covering the years between 1828-1915 of the Sardis Church of Christ is now available in the Digital Library of Georgia. The Sardis Church of Christ, associated with the Primitive Baptist Church, was one of the first churches to be established in Harris County, in west-central Georgia. This resource belongs to the Chipley Historical Center of Pine Mountain, Georgia, and has been made available online thanks in part to the DLG’s Competitive Digitization grant program, a funding opportunity intended to broaden DLG partner participation for statewide historic digitization projects.
The record book and descriptive information are available at:
dlg.galileo.usg.edu/id:chipley_scc_sard.
Harris County was established in 1827, carved from Muscogee and Troup Counties, and from lands ceded by the Creek Nation in the 1825 Treaty of Indian Springs, and reaffirmed in the 1826 Treaty of Washington. A year later, in 1828, the Sardis Church of Christ was formed.
For the most part, the Sardis Baptist Church of Christ records follow a predictable format of when a meeting was held, who preached at the meeting, and that an invitation was given. The records also contain names of those that joined by declaration or by letter, and those that left by their own choice.
The Sardis Church also had African American members. Before the Civil War, these members are often listed only by their first names and are often denoted as “property of,” indicating their status as enslaved individuals. After the Civil War, the notations change to “colored” or sometimes “freedman” and their last name was often included. However, no matter what race, the Church always referred to a member as Brother or Sister.
At the beginning of the twentieth century, the church minutes in the record book become shorter and shorter for each meeting, and membership declines. This is probably due to the establishment of other churches nearby and the increased reliability of roads and transportation.
Although the Sardis church no longer exists, the church record book is a valuable tool for both those researching Primitive Baptists in regions other than the wiregrass region of Georgia or for those researching very early Georgia churches.
Malinda Brooks, a member of the board of directors of the Chipley Historical Center, notes:
“Personally, I have used the Sardis minutes in preparation of two published family genealogy books…Researchers are excited to find out when their family members entered and exited the Sardis membership, including the death dates of some members. These death dates, especially those that have not been found elsewhere, are treasures to researchers. Most recently, a woman researching her family for her Daughters of the American Revolution (DAR) membership application was able to find ancestors in the Sardis record book which helped strengthen her DAR research, especially given that the DAR was unable to track the correct ancestor.”
About the Chipley Historical Center of Pine Mountain

The Digital Library of Georgia (DLG) is pleased to announce the availability of the Henry L. Benning Civil War materials collection at http://dlg.galileo.usg.edu/CollectionsA-Z/ghlb_search.html. The collection, which belongs to Columbus State University Archives, is available online thanks in part to the DLG’s Competitive Digitization grant program, a funding opportunity intended to broaden DLG partner participation for statewide historic digitization projects.

Henry L. Benning was born in Columbia County, Georgia in 1814. After finishing first in his class at the University of Georgia in 1834, he moved to Columbus in 1835. There, he was admitted to the bar, married Mary Howard in 1839, and entered his father-in-law’s firm. In 1840, Benning lost a race for the General Assembly, but was later elected to the state Supreme Court in 1853. After Lincoln’s election, Benning became one of Georgia’s most vocal supporters for secession. During the war, he served as Colonel of the 17th Georgia Infantry in twenty-one engagements including Antietam, Gettysburg, and Chickamauga.  By the beginning of 1863, Benning rose to the rank of brigadier general. His regiment was the first part of the Army of Northern Virginia under Robert E. Lee and later under Braxton Bragg in the Army of Tennessee. After the war, Benning returned to Columbus and resumed the practice of law, dying on his way to the court in 1875.


Benning’s war correspondence deals with his service throughout the war and includes orders sent to him, reports of engagements, both those sent to him and those he submitted to his superiors.

David Owings, head of Columbus State University Archives states: “General Benning is certainly an important figure in Georgia’s history, who resonates nationally because of his role in the Civil War. This material will attract broad national interest from scholars as well as those with a casual interest in the Civil War. We are excited that the Digital Library of Georgia has helped us increase access to our collections by making General Benning’s involvement in this important period of our history available online.”

About the Columbus State University Archives

Based at the University of Georgia Libraries, the Digital Library of Georgia http://dlg.galileo.usg.edu/ is a GALILEO initiative that collaborates with Georgia’s libraries, archives, museums and other institutions of education and culture to provide access to key information resources on Georgia history, culture and life. This primary mission is accomplished through the ongoing development, maintenance and preservation of digital collections and online digital library resources.  DLG also serves as Georgia’s service hub for the Digital Public Library of America and as the home of the Georgia Newspaper Project, the state’s historic newspaper microfilming project.