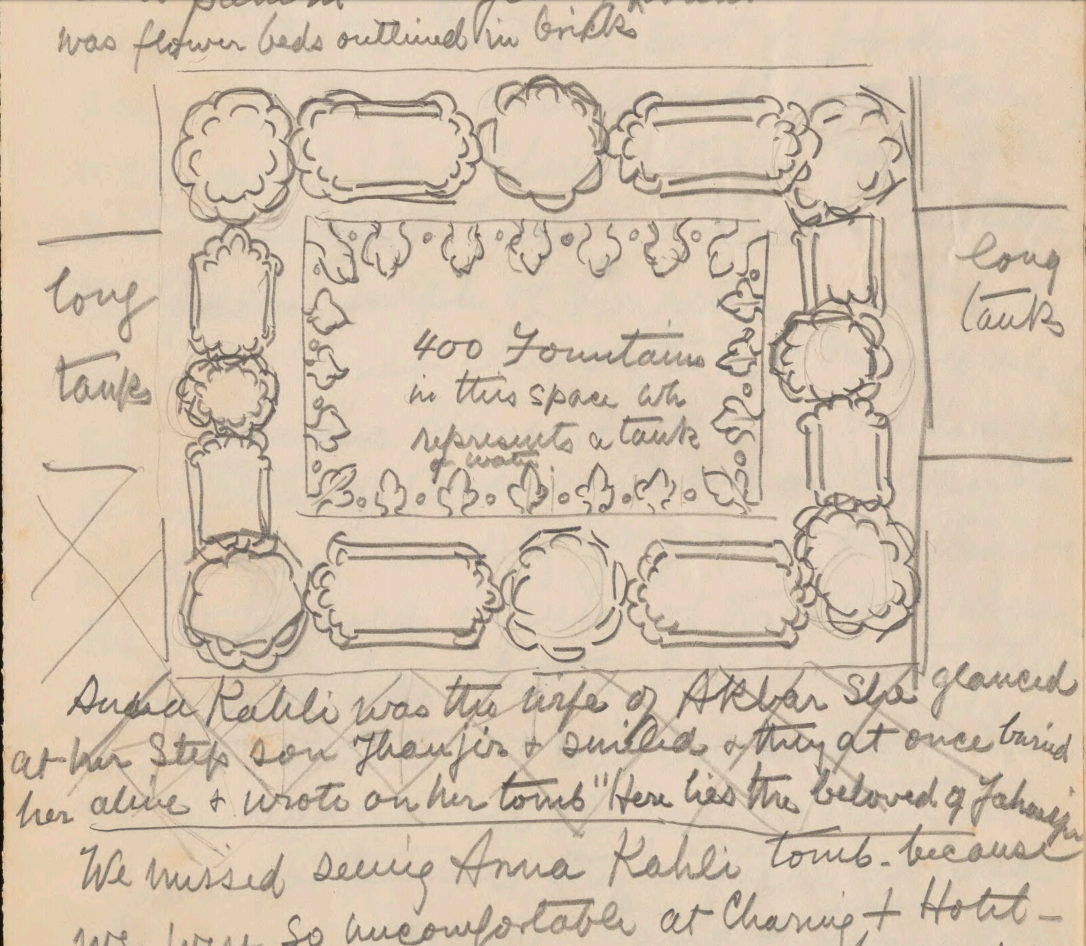 The Digital Library of Georgia (DLG) is pleased to announce the availability of Juliette Gordon Low’s 1908 India travel correspondence at http://dlg.galileo.usg.edu/CollectionsA-Z/jglowc_search.html. The collection, Juliette Gordon Low Correspondence, Series India Letters, belongs to Girl Scouts of the USA and is housed at the Juliette Gordon Low Birthplace. It is available online thanks in part to the DLG’s Competitive Digitization grant program, a funding opportunity intended to broaden DLG partner participation for statewide historic digitization projects.

Juliette Gordon Low, founder of Girl Scouts of the USA; her 18-year-old niece Elizabeth Parker; and another friend, Grace Carter, traveled throughout northern India and parts of what is now Pakistan in 1908. Low wrote letters to her family describing her experiences and impressions and, using carbon paper, copied the pages into a journal. Her accounts document visits to Madurai, Madras, Calcutta, Benares, Lahore, Delhi, and Bombay. Low’s work is an excellent example of an early 20th-century woman’s travel journal. Few American women journeyed to present-day Pakistan and India as the founder of the country’s largest girls’ leadership organization and her companions did, unaccompanied by men. Low recorded their progress as they traveled to sites that included the Golden Temple of Amritsar, the Shalimar Gardens, the Taj Mahal, Shah Jahan’s Red Fort, Humayun’s Tomb, the site of the 1857 Indian Rebellion, the Qutub Minar, and the Tughlaqabad Fort ruins. She described the difficulty of making travel arrangements and wrote detailed descriptions about food, culture, festivals, shopping, animals, and art. The women met with Princess Bamba Jindan Singh, the explorer Sir Francis Younghusband, and numerous British army officers.

Stacy A. Cordery, professor in the Department of History at Iowa State University, and biographer of Juliette Gordon Low states: “Juliette Gordon Low’s India travel diary was essential to the writing of my biography of Low, and I thought at the time that it deserved publication on its own because of the breadth and importance of the topics covered. It would be a terrific boon to scholars and the interested public (including school children) should this diary be digitized and available. Among other things, it would help to bring more attention to one of Georgia’s most famous citizens.”

Until now, the letters have only been accessible to researchers able to travel to view them in person. Digitization will make the materials available to a wider audience, potentially including users such as students studying Low as part of their curriculum, graduate students, art historians, tourism professionals, Asian studies scholars, historians, history enthusiasts, and girls and women associated with Girl Scouting. Low’s significance to Georgia history is evidenced by her inclusion in the state’s second-grade curriculum. Low recognized the need to train girls to have courage, confidence, and character, and these letters demonstrate this. The letters also present her as a multi-dimensional woman with prejudices reflective of her era and upbringing. The collection of letters is an important initial collaboration between the Digital Library of Georgia and Girl Scouts of the USA (GSUSA) as GSUSA seeks to make its cultural assets more widely available.

About the Juliette Gordon Low Birthplace

The Juliette Gordon Low Birthplace, a historic site owned and operated by Girl Scouts of the USA for more than 60 years, is filled with rich stories, special collections, and opportunities for unique experiences reflecting the arc of Juliette Gordon Low’s life.

The birthplace celebrates Juliette’s belief in the potential of every girl, and the remarkable, Girl Scout Movement she founded–a Movement that changed, and continues to change, the world.

With funds raised in part by Girl Scouts around the nation, GSUSA purchased the property in 1953, and has responsibly stewarded it for more than 60 years, earning numerous awards for exemplary historic preservation.

Today the Juliette Gordon Low Birthplace is listed on the National Register of Historic Places for its contribution to the social, cultural, and philanthropic history of the United States.

About Girl Scouts of the USA

We’re 2.6 million strong–1.8 million girls and 800,000 adults who believe in the power of every G.I.R.L. (Go-getter, Innovator, Risk-taker, Leader)™ to change the world. Our extraordinary journey began more than 100 years ago with the original G.I.R.L., Juliette Gordon “Daisy” Low. On March 12, 1912, in Savannah, Georgia, she organized the very first Girl Scout troop, and every year since, we’ve honored her vision and legacy, building girls of courage, confidence, and character who make the world a better place. We’re the preeminent leadership development organization for girls. And with programs from coast to coast and across the globe, Girl Scouts offers every girl a chance to practice a lifetime of leadership, adventure, and success. To volunteer, reconnect, donate, or join, visit www.girlscouts.org.

Based at the University of Georgia Libraries, the Digital Library of Georgia http://dlg.galileo.usg.edu/ is a GALILEO initiative that collaborates with Georgia’s libraries, archives, museums and other institutions of education and culture to provide access to key information resources on Georgia history, culture and life. This primary mission is accomplished through the ongoing development, maintenance and preservation of digital collections and online digital library resources. DLG also serves as Georgia’s service hub for the Digital Public Library of America and as the home of the Georgia Newspaper Project, the state’s historic newspaper microfilming project.