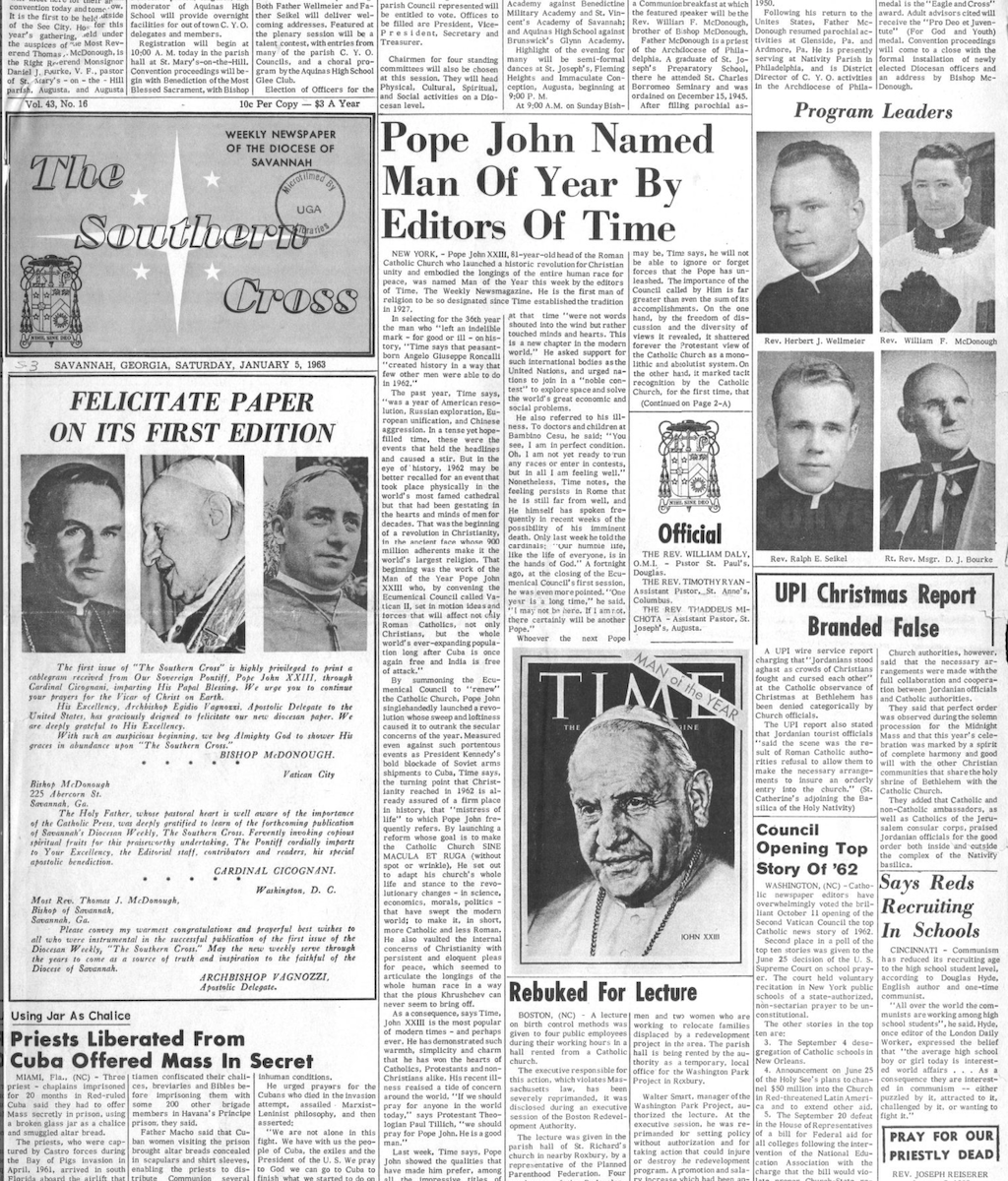 In conjunction with our partners at the Roman Catholic Diocese of Savannah, the Southern Cross (1963-2000) is now available for viewing at the Georgia Historic Newspapers website at gahistoricnewspapers.galileo.usg.edu/lccn/sn22185748/. These newspapers will contribute to a broader scholarship about Catholicism in Savannah as well as in Georgia. The Georgia Historic Newspapers Archive web site provides access to these newspapers, enabling full-text searching and browsing by date and title. The site is compatible with all current browsers and the newspaper page images can be viewed without the use of plug-ins or additional software downloads. The archive is free and open for public use.

About the Southern Cross

To fight Catholic prejudice and resist the spread of false information regarding Catholic beliefs and history, the Catholic Laymen’s Association (CLA) of Georgia was founded in 1916. The CLA published pamphlets that explained Catholic beliefs for several years and before establishing The Bulletin of the Catholic Laymen’s Association of Georgia, in January of 1920. The Bulletin ran as a monthly newspaper out of Augusta until 1956 when the organization changed the name to The Bulletin of the Catholic Laymen’s Association of Georgia, Official Newspaper for the Diocese of Savannah & Atlanta; this change coming after the diocese divided into two regions, Atlanta and Savannah. For a few months in early 1958, the Diocese of Savannah published the Savannah Bulletin, before the Bulletin began circulating two editions for Savannah and Atlanta through 1962. In 1963, the publication split into two separate diocesan papers, The Bulletin (Archdiocese of Atlanta) and The Southern Cross (Diocese of Savannah). The CLA disbanded in 1962, but the paper continued and exists today as the bi-monthly Southern Cross.

“The mission of the Southern Cross, the official newspaper of the Diocese of Savannah, is to help carry out the mission of the diocese through the print medium. It does … in the form of news articles, feature stories, commentary on aspects of the Faith, and their application to daily life … Through the local stories and photographs carried in the Southern Cross, the bishop and pastoral staff can communicate with the diocesan family, and the parishes can share their activities with one another.”

About the Roman Catholic Diocese of Savannah Archives

The Diocese of Savannah Archives was established as a private, institutional collection in accordance with Canon 491 to store and provide access to the permanent records of the Diocese of Savannah. It primarily collects inactive original records created by the work of Diocesan administration, parishes, and schools. Visit them at diosav.org/archives