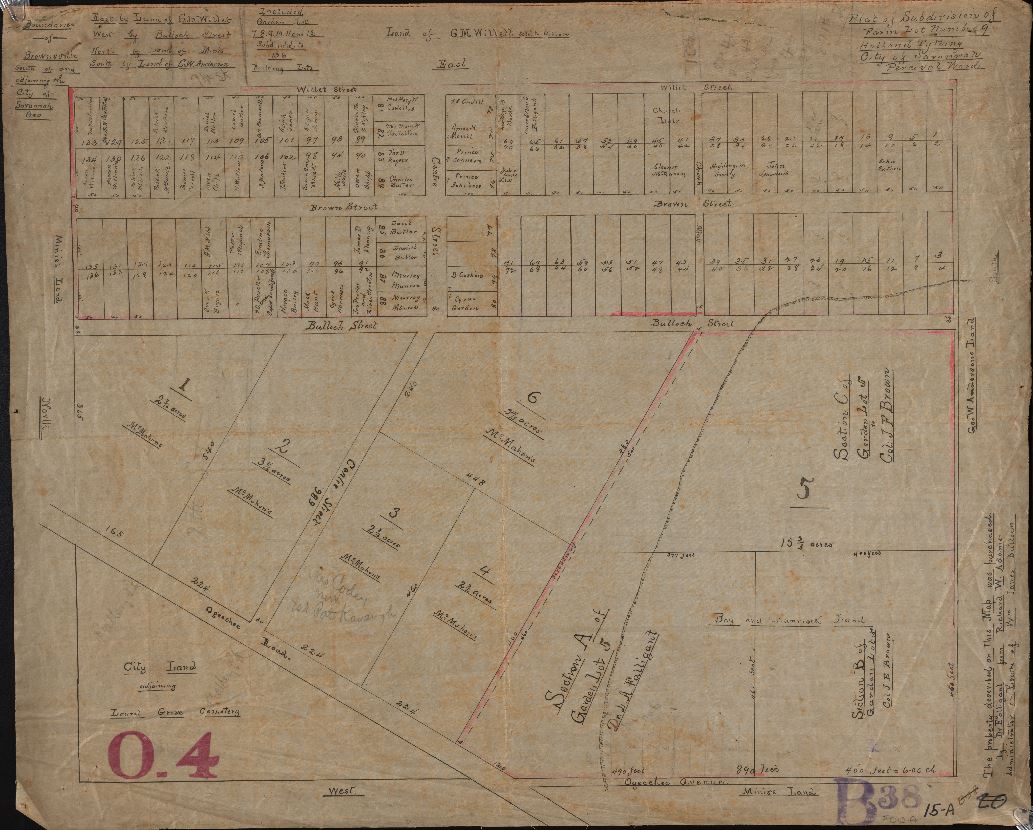 The Digital Library of Georgia is pleased to announce the availability of three new historical map collections from the City of Savannah Municipal Archives:

https://dlg.usg.edu/collection/gsg_edgm, which contains maps from 1798 to 1961 that illustrate Savannah property holdings, as well as land subdivision for City and private development. The maps also record property lines, right-of-ways, water and sewer lines, and street openings. Many maps include the names of property owners.

https://dlg.usg.edu/collection/gsg_scswsm. This collection includes survey maps of Savannah’s wards prepared in 1939 and 1940 by the Works Progress Administration (WPA) as part of the three-year, $65,000 WPA Savannah Cadastral Survey project. The city of Savannah is laid out in a system of wards, or blocks of land. The Cadastral Survey included all wards within the City’s corporate limits at the time. On May 9, 1940, Major H. U. Wallace, District WPA Engineer, presented Mayor Thomas Gamble with the Ward Survey Maps at City Hall. The survey was originally intended for use of the local tax assessors, but it has also proved useful for planning public utilities and improvements, determining property lines, and tracing the history of buildings and properties.

These historical maps are a rich resource documenting the development of Savannah’s town plan, wards, and neighborhoods through the 18th, 19th, and 20th centuries. Within the General Maps collection, the City of Savannah Municipal Archives has included a very early 1798 township map that documents the extension of the “Oglethorpe Plan” outside of the town limits to encompass the garden and farm lots. This, along with the progression of maps throughout the 19th and 20th centuries, show how Savannah’s unique plan was executed and evolved. The maps can be studied by urban planners, historians, and preservationists, and provide important insight for people making planning decisions today. The City of Savannah Municipal Archives has seen a dramatic increase in researcher interest in Savannah’s 20th century development, including citizens and community groups trying to document their neighborhoods, as well as historians researching the loss and preservation of Savannah’s infrastructure and built environment and how that fits in to a national context. The inclusion of the mid-20th century Ward Survey Maps provides a valuable point-in-time snapshot of Savannah before the preservation movement began.

Luciana Spracher, director of the City of Savannah Municipal Archives, notes: “The maps are regularly used by students (K-12 and college), historians, homeowners, citizens/residents, City staff, etc., and online access will surely increase this use and expand our geographical reach to those outside of Savannah who cannot physically come in to City Hall. We’ve also recently seen an increase in the ways in which people are using historical records, not just for traditional academic works, but for art applications and digital humanities projects. We hope that greater access to our records, and to a younger audience that may not access them through traditional onsite visits, will encourage new interactions with archives and new innovative projects.”

The City of Savannah Municipal Archives collects, manages, preserves, and makes accessible records documenting the City of Savannah’s history; administers the records management program and the City Records Center to increase the efficiency of City agencies; and shares the City’s history with City employees, citizens and visitors through outreach activities. The Municipal Archives services reference requests from researchers and the general public which relate to archival and historical City records under its administration in the City Records Center, and shares the City’s history through a variety of public outreach activities, including tours of City Hall, permanent and rotating exhibits, and special programs.

Based at the University of Georgia Libraries, the Digital Library of Georgia https://dlg.usg.edu is a GALILEO initiative that collaborates with Georgia’s libraries, archives, museums, and other institutions of education and culture to provide access to key information resources on Georgia history, culture, and life. This primary mission is accomplished through the ongoing development, maintenance, and preservation of digital collections and online digital library resources.  DLG also serves as Georgia’s service hub for the Digital Public Library of America and as the home of the Georgia Newspaper Project, the state’s historic newspaper microfilming project.

Featured image:  Boundaries of Brownsville, south of and adjoining the City of Savannah Geo. [Bounded on the] east by land of G. M. Willis; west by Bulloch Street; north by land of Minis; south by land of G. W. Anderson. Included Garden Lots 7, 8, 9, 10, 11 and 12 subdivided to 136 building lots.

This project was made possible through DLG’s Subgranting Program

Our friends at Georgia State University have just launched a new resource, Works Progress Administration Maps of Atlanta. The site features over 950 maps including the 1940 Report of the Real Property, Land Use, and Low Income Housing Area Survey of metropolitan Atlanta, a 1936-1938 Atlanta Cadastral Survey, and a partially incomplete series of Fulton County land use maps from 1937-1940. You can also search the collection within DLG.