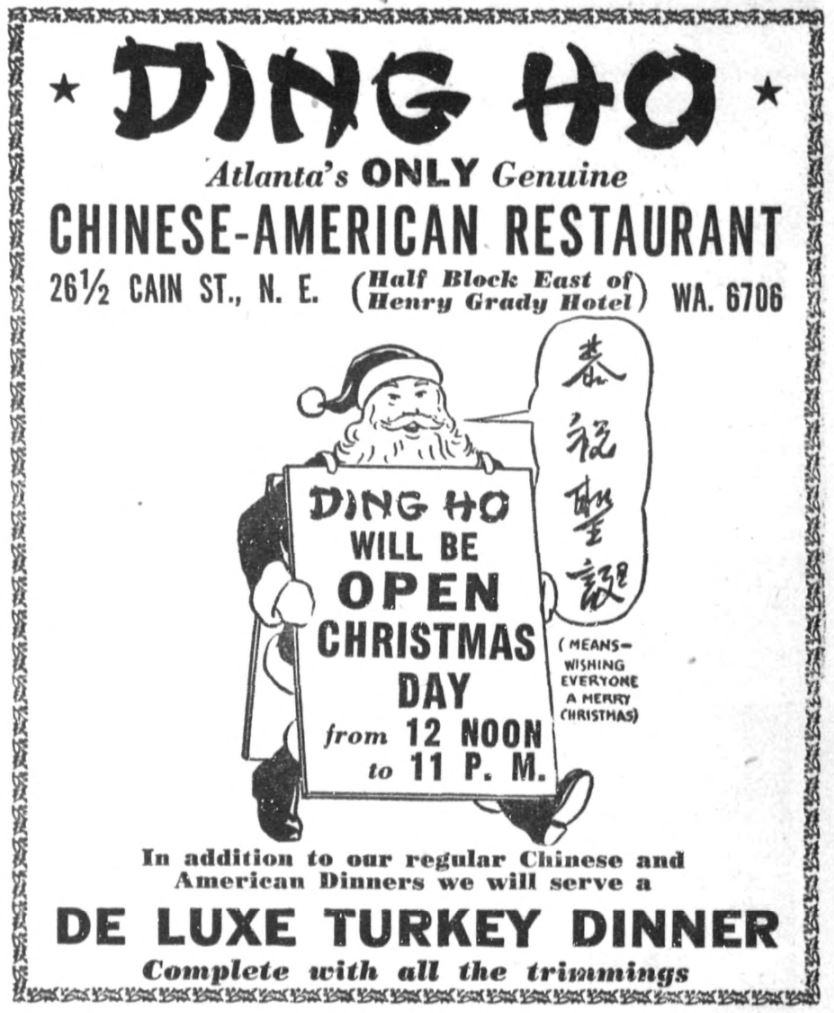 Newspapers have always been one of my favorite sources of work, and the DLG Georgia Historic Newspapers collection is one of my favorite sources of full-text searchable newspapers to use for this type of research. There are many different approaches to examining newspapers, but one that you may find useful is finding global connections in local sources. One global thread that interests me is how diverse foodways are introduced to new communities. Marketing methods tell us how customers were enticed to try food that may be new to them.

This marketing idea led to thinking about the special connection of the Jewish community to the  Chinese culinary scene. The relationship between Jewish communities and Chinese food is particularly evident around the Christmas holidays. Yong Chen’s Chop Suey, USA, explores the topic of Chinese food in the United States and pays some attention to cultural connection centered around food between Jewish and Chinese communities. The Southern Israelite proved to be an excellent source to ask questions about how the Jewish community in Atlanta was sold on Chinese food.

While this project is still in its early stages, I have discovered a few interesting facets of the marketing of Chinese food to the Atlanta Jewish community. A few quick facts:

There’s more research to be done, but thanks to the Georgia Historic Newspaper Project at the DLG, the ease of accessing resources like the Southern Israelite will allow for deeper discoveries that allow us to make global connections with a local context.

This project originated as a class project during this past semester in Dr. Ian Fletcher’s History 8490 at Georgia State University. In this course, we spent the term coming to an understanding of the importance of global history and how each student in the class might use elements of global history in their research and teaching. Students in this course decided to conduct a research project on food and global context in Atlanta.

The final map for the class was created by Curt Jackson and is available here:

One Reply to “Even Santa Claus Eats Here: The Southern Israelite and the Marketing of Chinese Food”