Colonel John H. Seals and his brother William H. Seals established the Sunny South literary magazine in Atlanta in November 1874. Each issue was made from newsprint and cost readers five cents an issue or $2.50 for a yearly subscription. The magazine struggled during the early months of its publication. Colonel Seals was forced to take out loans and sell his personal property to keep the publication afloat until subscriptions began to trickle in. Despite the initial financial difficulties, the Sunny South’s circulation continued to grow at a steady rate, reaching ten thousand in 1880 and one hundred thousand just five years later.

Throughout its publication, the Sunny South focused largely on southern literature and each issue included short fiction, poetry, and serialized novels aimed at a female audience. In addition to fiction, most editions of the Sunny South included illustrations, household advice columns, and local news editorials. Politically, the magazine was consistently a progressive advocate for women’s rights.  Associate editor Mary Edwards Bryan was a long standing supporter of a variety of issues related to gender equality, including job availability and coeducation.  In 1895, the Sunny South became the first publication in 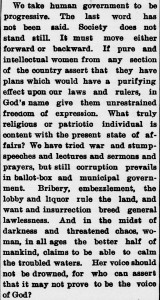 Atlanta to officially endorse equal suffrage rights for women in the United States. In this editorial from the February 9, 1895 issue of the  Sunny South (right), the unnamed writer asserts that women deserve the chance to be heard and suggests their participation could be the answer to society’s ills.

The Atlanta Constitution purchased the Sunny South from John H. Seals in 1893 and ran it as a weekly supplement to the Sunday editions of the paper. The Sunny South eventually merged with Uncle Remus’s Magazine in 1907. The new publication was edited by  celebrated writer and journalist Joel Chandler Harris until his death the following year. The magazine continued publication under the direction of his son before folding in 1913.

The Sunny South is available online as part of the Atlanta Historic Newspapers Archive. The archive provides images of the magazine that are both full-text searchable and browsable by date.