19th and 20th-century issues from the journal of the largest group of Protestant women in the world have just been digitized. Mercer University Special Collections and Archives have partnered with the Digital Library of Georgia (DLG) to digitize Mercer’s run of the Mission Messenger from 1895-1921, published monthly by the Woman’s Baptist Missionary Union of Georgia (WBMU), more commonly known today as simply the Woman’s Missionary Union (WMU).

The Mission Messenger was digitized and described as part of the DLG’s competitive digitization subgrant program, broadening partner participation amongst nonprofit cultural heritage institutions across the state.  The collection was transferred to Mercer directly by the WMU, making it likely the most complete run of the Mission Messenger for the period.

Starting from a handful of women in 1888 as the WBMU, the organization became the largest Protestant group for women in the world, with a membership of approximately 1 million. It was also the first and remains the largest body of organized laity in the Southern Baptist Convention.

Women’s organizations like the WBMU played a significant role in American life during the 19th and early 20th centuries, mobilizing women to raise money for Southern Baptist missions worldwide.

Written contributions to the Mission Messenger came from a broad variety of WBMU members across the state.

One of its most famous contributors was Mary Emily Wright Wilbur, a notable female leader of fin de siècle Georgia and the first member of WBMU leadership, who served as one of the publication’s early editors from 1899-1906.

Although consigned to the private sphere of the home by law and custom, women influenced the public sphere of policy and society through organizations dedicated to causes such as temperance, poverty relief, anti-slavery, and suffrage, among others.

Reports from local church chapters, adult and children’s programming suggestions, letters to the editor, financial reports, fundraising drives, Bible studies, and reports from Southern Baptist missionaries worldwide were regular features of the magazine and described how Georgia women viewed the world and demonstrated Georgia’s influence across the globe.

Issues of the Mission Messenger show how Georgians responded to significant historical events, including:

These issues are also a valued resource for scholars interested in:

Genealogists will also find this collection valuable because of the articles and entries documenting individual members and contributors.

Beth Ann Williams, the current executive director of the WMU, emphasizes the importance of the Mission Messenger’s digitization:

“What began as a small number of missionary societies in Georgia Baptist churches has grown into women’s ministries and missions discipleship for all ages for 3,600 churches. A digitized Mission Messenger provides widespread and easy access to state and church women’s leadership. [They] would be able to read first-hand about the successes, struggles, challenges, and accomplishments of the WBMU. What a valuable and interesting source to help highlight the early years of missionary giving and serving that was done by and through Georgia Baptist women.”

Housed in the Jack Tarver Library on Mercer University’s Macon campus, Special Collections is located on the Library’s 3rd floor and preserves the University’s archives and records from all Baptist traditions. Special Collections staff assist with University faculty, students, and staff as well as patrons from national and international scholarly communities. Visit https://libraries.mercer.edu/research-tools-help/archives for more information. 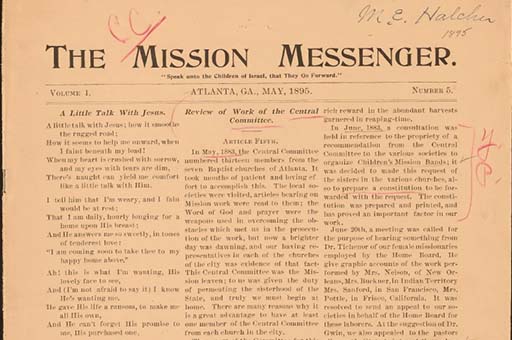 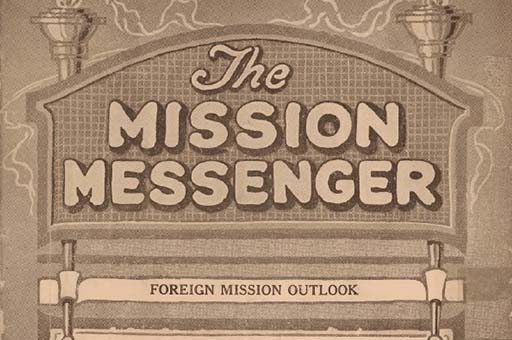